St. Bernard’s Catholic Church serves the small town of Jordan Valley in southeast Oregon and the small family ranches of the surrounding area.

In its early days, Jordan Valley did not have a church. The first priests to serve the area were missionary priests from the Boise and Baker Dioceses. Then, in 1914, Irish and Basque settlers and sheepherders began to build the church from the native stone. Little is known about the people who built the church, but the names Fenwick, Maher, Swisher, Warn & Connors can be seen on the top of the steeple. 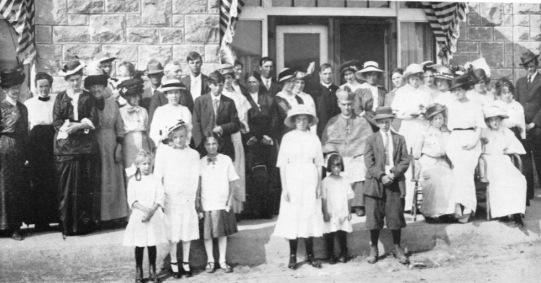 Because of Jordan Valley’s small size and distance from major towns, St. Bernard’s fluctuated between being a mission church and having an appointed priest. At certain times Mass was offered only once a month due to the lack of a parish priest.

In 1958 St. Bernard’s was officially named a parish and the first mission by the pastor was to erect a mission church in Arock. By April 1959 Holy Family of Arock church was finished.

In the 1950’s, one of the Franciscan Fathers of Santa Barbara Providence on loan to the Diocese of Baker was sent to Jordan Valley to serve the parish. It became apparent that he needed housing, so a friend of his came and built a small living quarter over the sacristy. (That living quarter is still there to this day, although in disrepair).

A rectory was built in the 1960’s, and the parish hall was built soon after.

In the 1970’s, the church was renovated, and a life-sized crucifix was donated by friends of Fr. Curtiss. The crucifix originally came from Italy.

The church changed little between the 1970’s and the early 2000’s. During this time there was parish priest stationed at St. Bernard’s, but in the early 2000’s there became a shortage of priests in the Baker Dioceses and the parish became a missionary parish again with a priest traveling from Ontario, Oregon every Sunday to offer mass.

In 2015 St. Bernard’s once again received a resident pastor, Fr. Clemens. In 2016 Fr. Clemens began a major renovation of the church.